Robert Glenn “Robbie” Lawler is an American mixed martial artist born on March 20th 1982. He is the former UFC welterweight champion and former EliteXC Middleweight Champion. Lawler has won three consecutive Fight of the Year in 2014, 2015 and 2016.

Robbie Lawler grew up in Bettendorf, Iowa and began training Karate at the age of ten. He went to Bettendorf High School where he was got All-State honors in wrestling and football. He joined Miletich Fighting Systems (MFS) under head trainer Pat Miletich when he was just 16 years old.

Robbie Lawler’s career before the UFC

Robbie Lawler made his amateur MMA debut in January of 2001 and fought two fights in the same night, winning both by (T)KO in the first round.

Robbie Lawler made his UFC debut at UFC 37 – High Impact in May of 2002 against Aaron Riley. This was Lawlers first time going to a decision, which he won. He came back on UFC 37.5 – As Real As It Gets a month and a half later, defeating Steve Berger by TKO.

At UFC 40 he faced veteran Tiki Ghosn and won by highlight-reel knockout.

An injury to his hip gave Lawler his first loss to Pete “The Secret Weapon” Spratt at UFC 42, but he rebounded to defeat Chris “Lights Out” Lytle by unanimous decision. 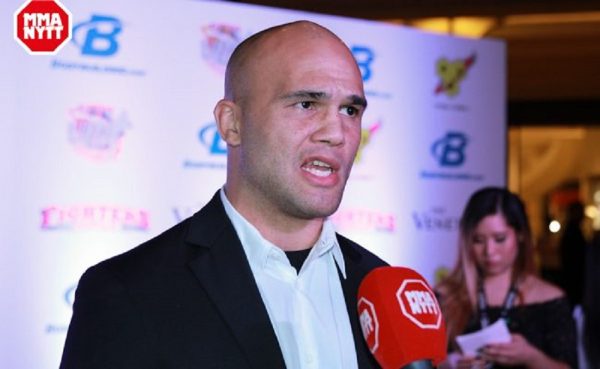 Robbie Lawler faced former WEC Welterweight Champion and future superstar Nick Diaz at UFC 47. This marked the first time Lawler got knocked out with a jab. His second loss in a row came at UFC 50 against Evan Tanner who went on to win the Middleweight Championship.

His record outside the UFC was 11 wins and 6 losses. Notable wins include Melvin Manhoef, Matt Lindland, Murilo “Ninja” Rua and Frank Trigg.

Lawler made his return in the welterweight division against Josh Koshcheck at UFC 157 – Rousey vs. Carmouche. Lawler won by TKO in the first round.

After two more wins against Rory Macdonald and Bobby Voelker Lawler got a shot at the welterweight champion Johny Hendricks.

The fight was extremely close but Lawler lost a split decision. He rebounded with two more wins to get another shot at Hendricks. The 2nd fight was as close as the first but Lawler got the decision this time.

His first title fight was one of the best fights in UFC history against Rory MacDonald. The fight was back-and-forth with both fighters getting rocked and Lawler’s lip getting cut up. In the 5th round Lawler connected to the face of MacDonald who collapsed.

His next title fight was also one of the best ever and was nominated for Fight of the Year in 2016, against former interim champion Carlos Condit. When the bell sounded for the last round, both fighters collapsed against the cage, clearly fatigued.

Robbie Lawler defended his title against teammate from American Top Team Tyron “The Chosen One” Woodley. Woodley connected with a thunderous right in the first round and knocked Lawler out.

Lawler took a year off and came back to beat Donald “Cowboy” Cerrone at UFC 214 – Cormier vs. Jones 2.

Robbie Lawler’s next fight in the UFC

At time of writing Lawler doesn’t have a fight lined up. Rumor has it that he will face Jorge “Gamebred” Masvidal for an interim title, that rumor has since turned false as Masvidal will instead face Stephen Thompson.