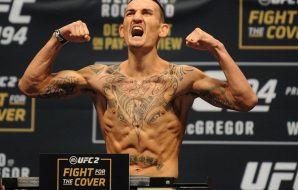 Jerome-Max Kelii Holloway is an American mixed martial artist of Samoan descent born on December 4th of 1991. He is the reigning defending UFC Featherweight Champion. He trains at Gracie Technics in Honolulu and Legacy Muay Thai. Holloway is an avid gamer and often streams on Twitch.tv.

Max Holloway’s career before the UFC

His 5th pro fight was his UFC debut against Dustin Poirier on UFC 143 – Diaz vs. Condit.

Max Holloway’s career in the UFC

His worst losing skid of his career was a fact after he lost to top contender Dennis Bermudez and a decision loss to super star and double UFC Champion “The Notorious” Conor McGregor.

The losing streak lit a fire under Max Holloway. He started a incredible win streak that eventually would lead him to a title fight. After winning 9 straight fights against tough competition such as Ricardo Lamas, Cub Swanson, Jeremy Stephens and Charles Oliveira he got a chance to fight for the UFC Interim Featherweight Championship.

After McGregor won his second title at lightweight and got stripped of his featherweight belt by the UFC, they matched up Holloway with former lightweight champion Anthony “Showtime” Pettis.

Pettis missed the fight and with a win he would not receive the belt. Holloway won a dominant fight and finished Pettis by TKO in the third round.

After winning the interim title he got a unification with undisputed champion Jose Aldo, and Holloway once again delivered the performance of a lifetime while winning by TKO in the third round after ground-and-pounding Aldo for over a minute.

Max Holloway’s next fight in the UFC

At time of writing UFC has no scheduled fight for Max Holloway.