Benavidez was born in Texas and is of Mexican descent, he started boxing and kickboxing in high school. He won many championships in kickboxing before he started wrestling at 16 years old. In 2000 he became state champion in New Mexico. 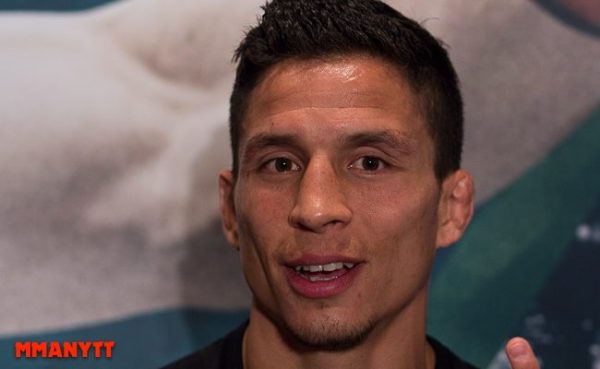 Joseph Benavidez’s career before the UFC

Joseph Benavidez made his MMA debut in June of 2006, winning by submission. He went on to win his first 10 fights, most notably beating Jeff Curran at WEC 40. He faced Dominick “The Dominator” Cruz at WEC 42 but rebounded from the loss  with two straight wins to get another shot at Cruz, who at the time was WEC Bantamweight Champion.

The rematch didn’t go Benavidez’ way as he lost by decision. He won one more fight before the WEC folded into the UFC.

Joseph Benavidez’s career in the UFC

Joseph Benavidez made his UFC debut against Ian Loveland at UFC 128 and won by unanimous.

He continuted his winning streak, winning two more fight before getting his the chance to fight for the inaugural flyweight championship. The two fights was part of a four man flyweight tournament.

Joseph Benavidez faced off against Demetrious “Mighty Mouse” Johnson at UFC 152: Jones vs. Belfort. The fight was very close but Benavidez ultimately lost the fight by split decision.

He got a second crack at “Mighty Mouse”, only to get knocked out after two minutes of the first round.

After getting knocket out by Johnson has been knocking off contenders one by one, in his current streak he has beaten Henry Cejudo, Tim Elliott, John Moraga and Dustin Ortiz.

Joseph Benavidez’s next fight in the UFC

At time of writing Joseph Benavidez doesn’t have a fight scheduled.