Valentina “Bullet” Shevchenko is Muay Thai fighter and mixed martial artist from Kyrgyzstan of Peruvian descent. She competes in the UFC Women’s Bantamweight Division. She was born in Frunze, Kirghizia, USSR on the 7th of March 1988, into a martial arts family. Her mother is a third degree black belt in Taekwondo.

Shevchenko trained in multiple martial arts disciplines from an early age. Her trainer Pavel Fedotov taught what he called “Universal Martial Arts” long before MMA was popular. They also competed on the weekends, often in two different events and disciplines in the same day. Fedotov also coined the nickname “Bullet” because of Valentina’s speed in the ring.

Valentina Shevchenko had a great career before starting MMA; she is a 17-time World Muay Thai/ K1 Champion and Master of Sports in several disciplines (Boxing, Kickoxing, Taekwondo, Judo). 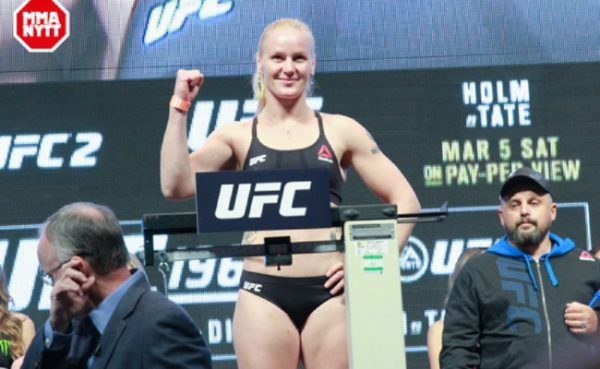 Valentina Shevchenko made her pro MMA debut in 2003 and won her first seven fights until her first loss against Liz Carmouche. The loss was controversial as Carmouche hit Shevchenko with an illegal upkick that opened a cut over Valentina’s eye. The referee didn’t call a foul and the doctor waved the fight off.

That gave the victory to Carmouche, but Valentina would rebound and win two fights in a row and sign to fight in the UFC.

Valentina Shevchenko in the UFC

Valentina Shevchenko made her UFC debut on short notice against Sarah Kaufman at UFC on FOX 17: dos Anjos vs. Cerrone 2 on the 19th of December 2015. After a very close fight she won by split decision.

Her next fight was also close, against future champion Amanda Nunes in Las Vegas, UFC 198: McGregor vs Diaz. After losing the first two rounds due to being a slow starter, Valentina took over in the third round and finished the fight strong, as “The Lioness” was tiring. She ultimately lost the fight by unanimous decision.

Shevcheko bounced back with two straight wins against top competition in Holly Holm and Julianna Pena, finishing the latter by armbar which was a shock to many.

Valentina Shevchenko’s next fight is a title fight for the Women’s Bantamweight Championship of the World, a rematch against Amanda Nunes. They were originally scheduled to fight at UFC 213: Nunes vs. Shevchenko 2 (later renamed UFC 213: Romero vs. Whittaker), but Nunes had to withdraw the day of the fight due to illness.

The fight now will be the co-main event of UFC 215: Johnson vs. Borg on the 9th of September in Edmonton, Alberta, Canada.